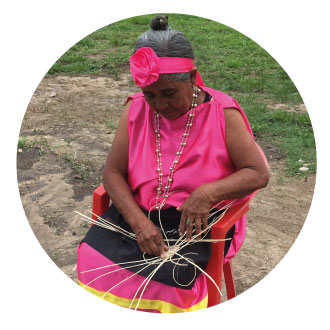 Day 1: Tartagal is a northern Argentine city in the provice of Salta. It is located in the northeastern part of the province. Due to its economy, it is the third most important city in the province after Orán. It is known as an oil and gas extraction center as well as an important activity of extraction of timber. The distance from Salta, the capital city of the province is 365 km and 57 km from the Bolivian border, 103 km from the Paraguayan border and 1736 from Buenos Aries City. Tartagal is connected to the rest of the province and the country by the National Route 34 and has no airport. Reception at the hotel. Accomodation at Portico Norte Hotel or similar.

Day 2: Breakfast at hotel and then we´ll depart at 9.00 am to Yariguarenda Guaraní Community. Reception and some suggestions for our visit. We´ll have a good time learning in the forest nursery the value of afforestation of native species and we´ll be invited to get involved in the different steps of the production process of native, ornamental and aromatic species. Depending on the season, other activities could be: searching for seeds, transferring seedlings or indetifying species based on stems, leaves and seeds. Each visitor will leave their mark at Yariguarenda by planting a native tree along the community´s main road which leads to the Virgen de la Peña Sanctuary. Later we´ll have lunch prepared with vegetables from the fence: our hosts will invite us to join in cooking our lunch with healthy ingredients free agrochemicals. Menus are designed following the agricultural calendar just like local families have been doing ancestrally, cooking in a creative way according to the ingredients they get in each season of the year. In the afternoon we´ll take part of a cultural workshop where Natalia Valdez, our host in the community, invites us to know the history of the Guaraní people in order to understand life at Yariguarenda, which means “Toad Place” in Guaraní language. Return to Tartagal. Accomodation at Portico Norte Hotel or similar.

Day 3: Experience at La Salamanca Community. After breakfast at the hotel, we´ll depart at 9.00 am to La Salamanca Community. This morning will make “The Path of the Masks” by learning to carve in wood and paint small masks. In the company of great master craftsmen, we´ll experience part of the creative process of a mask in this intercultural meeting. We´ll become creative craftsmen of our own masks which we´ll keep as a souvenier of this experience. Later we´ll have lunch prepared with vegetables from the fence: our hosts will invite us to join in cooking our lunch with healthy ingredients free agrochemicals. Menus are designed following the agricultural calendar just like local families have been doing ancestrally, cooking in a creative way with the ingredients they get in each season of the year. In the afternoon we´ll participate in a workshop to perform Arete Guazú: this is a cultural meeting which goal is to learn about each participant´s role in the ceremony, the history it tells and the music among other details. The community wishes to show importance of Arete Guazú from a playful and recreative activity and for that reason we request the greatest respect. Return to Tartagal. Accomodation at Portico Norte Hotel or similar.

Day 4: Experience at Peña Morada Community Breakfast at hotel. Departure at 9.00 am to the Guarani Community. Today we´ll meet Guaraní Peña Morada Community. After arriving we´ll participate in a basketry workshop: a traditional art of the Guaraní people who got the raw material from vines after walks in the mountain longer than 8 hours. At Peña Morada the artisan teachers will coordinate a workshop where they will pass their know-how to us. By the end of this class, we´ll take our own piece of art as souvenier made with our own hands. In addition, it will be possible to appreciate the Artisan Hall of the community whose construction values the ancestral adobe techniques. Return to Tartagal to Portico Norte Hotel or similar at around 12.30 pm.

End of our services.